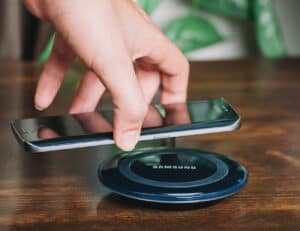 Wireless charging may seem like a recent concept as it is making headlines with current tech. This technology has been around since the late 19th century. Nikola Tesla demonstrated the ability to transmit electricity through the air by creating a magnetic field between two circuits.

Wireless charging got left basically unused over the years because there were limited practical applications. Scientists have also been trying to figure out a way to efficiently transfer large amounts of power using this technology. We are going to take a look at the basics of wireless charging and what it means for the potential use of the technology.

What is wireless charging?

How does it work?

When it comes down to the mechanics of how wireless charging works, it can be broken down into relatively easy ways to understand. Essentially, it uses a loop of coiled wires around a bar magnet, which is also known as an inductor. When an electric current passes through the coiled wire, it creates an electromagnetic field around the magnet, which can then be used to transfer a charge to something nearby.

Most of the uses we see for wireless charging today uses a mat with an inductor inside. In order for a device to charge it has to be fairly close. This is because the strength of the electromagnetic field drops significantly with distance.

Understanding what wireless charging is and how it works is only the beginning. What is the point of using it? We have been using corded charging for a very long time, why do we need to switch now?

Increased longevity is one major benefit. Many of us know the all too frequently happening problem of the charging cord breaking and fraying from constant use. With wireless charging you will find having a static charger will increase its usage because you aren’t pulling on cables every day.

Another benefit would be that the most common wireless charging standard, Qi, is available in all kinds of public places, especially in the US, which makes finding a wireless charging pad easier. In addition to their ease of use, it is a universal standard so you could potentially charge multiple devices with one charger. This could result in the reduction of the amount of power cables we need at home and even internationally.

Like any technology, there are advantages and disadvantages and there is always room for improvement. As the technology becomes more commonly used in households and offices we will see an increase in what we are able to do with it. One thing is certain, this technology is here to stay.